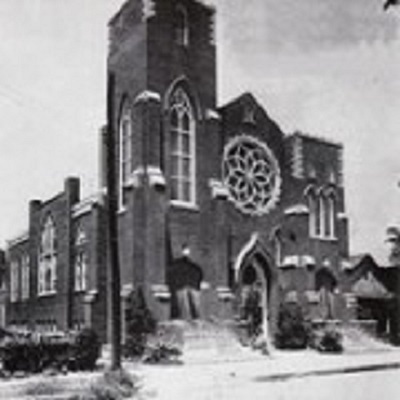 What is now known as the “Historic” Washington Street Missionary Baptist Church was born out of the upsurge of the spirit of freedom, which brought on a national conflict on the eve of the Civil War. The charter members were former members of the First Baptist Church, a white congregation of the city of Paducah. The large number of black members gave rise to the idea of a black organization. The black members were granted letters of dismissal for the purpose of organizing their own congregation.

Reverend George Brent, of the First Baptist Church offered his services in organizing the new church, as there was not a minister among the slaves. Under his leadership, Washington Street Missionary Baptist Church was organized in a small log cabin on this present site on the first Sunday in February, 1855.

Reverend George W. Dupee was called to lead Washington Street in 1858. His training and teaching of the membership in ethics of worship earned him the name, “Pappy Dupee.” He ruled with a hickory stick, about two inches thick and three feet long, which he took to the pulpit. Reverend Dupee was the founder and moderator of the General Association of Colored Baptist, and he organized the First District Baptist Association in 1867. During the early years, Washington Street gained prominence and recognition as the largest black church in Western Kentucky. Reverend Dupee gave 39 years of invaluable service to our church, and died in 1897 after having preached, “Ye Must Be Born Again.”

Over the years, the faces have changed, but God still remains the same. From then to now, Washington Street Missionary Baptist Church still remains serving God and spreading the gospel of Jesus Christ. Then, it was a small congregation born in a log cabin. Today, it is a multi-racial and multi-cultural congregation with the same mission, “Lifting Jesus.”

Throughout the ribbon of time, Washington Street Missionary Baptist Church has seen 17 pastors guide its ministry. From then to now, the church has persevered through 3 floods, a fire, and even the depression, while remaining faithful to its ministry. What began in a small log cabin on this site has become the harbinger of change, with dynamic growth in the community, as a church dedicated to serving God. Housed first in a log cabin and then in the magnificent stained glass and towered edifice of yesteryear to a beautiful edifice today, Washington Street is a plethora of positive people with potential.

Washington Street Baptist Church believes in you too, that’s why everyone is welcome here.